Audige reacts to his game-tying 3-pointer 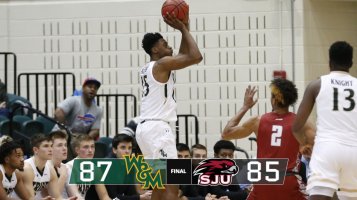 In just his second collegiate start and sixth collegiate game, the freshman poured in 16 second half points as the Tribe dug themselves out of a big hole. He was a catalyst on the defensive end, grabbing 3 steals and adding 2 blocks to help stymie a Hawks offense that scored 49 in the first half, but mustered just 36 second half points.

The Tribe used a 37-12 run over a 10-minute span to turn a 20-point deficit into a five-point lead. During the stretch, Audige scored 10 straight points on his own, including back-to-back 3-pointers, to single-handedly pull the Tribe back within 57-63 at the 12:32 mark. Audige connected on his fifth 3-pointer of the day with 48 seconds left to knot the contest at 85-85 before teammate Nathan Knight won it on a hook shot with 1.7 seconds left.