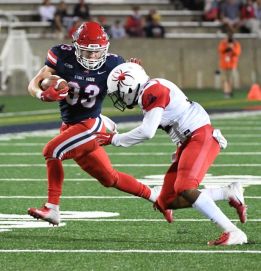 On Friday, two former Bears are expected at the New York Giants local Pro Day to display their skills ahead of the NFL Draft, set for April 25.

The Giants have 12 picks in the upcoming draft, a league-high, and will assess the talent from the tri-state area as they look to fill out their training camp roster.

Don Liotine ’13 and Jerome Washington ’12 both hope to make their way onto an NFL roster after completing their senior years this past fall.

Washington battled through injuries this past season, but in 2017 he led Rutgers in both catches (28) and receiving yards (282). His big frame and soft hands should attract draft attention.

Both look to become the first Stony Brook player drafted into the NFL since Jack Medd ’40 went to the Pittsburgh Steelers with the 89th pick of the 1946 draft.