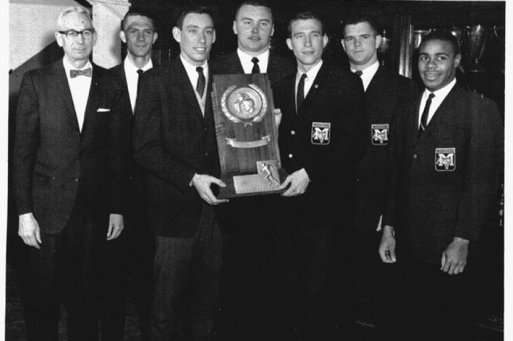 Lingle and the 1965 National Champion Tigers

On this day 53 years ago, Robin Lingle ’60 helped the University of Missouri win the NCAA Indoor Track National Championship. Here is the recap of the event from the St. Louis Dispatch Sun.

The Tigers scored 14 points to 12 for runner-up Oklahoma State, also a member of the Big Eight Conference. Villanova finished third with 11.

All performances were meet records because this was the first NCAA indoor, but Morgan State set an American college mark tumbling with a 3:15.6 timing in the mile relay.

Lingle easily defeated George Cermann of Seton Hall in the 1000 run before a sellout crowd of 9,553 in Cobo Hall’s spacious arena. The time was 2:09.9.

The sophomore Steve Herndon finished fourth in the high jump for the two points that boosted Mizzou to the top. Sophomore Charley Brown, the muscular little football halfback, ran fourth for the Tigers in the 60-yard dash. The other Mizzou points came from the 58-4 heave of junior Gene Crews in Friday’s shot put–good for third place.