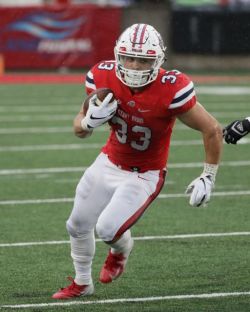 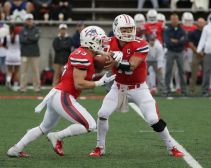 Yesterday afternoon, the Stony Brook University football team trounced Bryant, 50-21, in a non-conference win that evened their record at 1-1. Don Liotine ’13 was at the center of the Seawolves’ potent offense, racking up 107 yards on the ground (11 carries) and adding a 24-yard receiving touchdown.

Stony Brook built an early 20-0 lead, only to watch Bryant storm back to take a 21-20 edge with 6:38 left in the third quarter. With the Bulldogs bearing down, Liotine responded with a 24-yard aerial strike to ignite a 30-0 run to close the game. Liotine later told Newsday it was a “gotcha play” in which a little misdirection confused the defense and left him open for the key score.

“You could just feel the energy there,” Liotine said of striking back for the lead. “Once we were pushing into the red zone, you feel like that’s going to be a turning point in the game if you can execute there… You could just tell everybody’s ready.”

Liotine and the Seawolves travel to Fordham next Saturday for a non-conference match-up.